Variety and value-for-money property in Roodepoort Variety and value-for-money property in Roodepoort

The economy may be flat, but Roodepoort on Johannesburg’s West Rand is experiencing significant growth in demand for residential property, with stock shortages in many suburbs still spurring development, particularly in the entry to mid-market segments.

This six bedroom, six bathroom home in Constantia Kloof has a cinema room, study and playroom. It is on the market for R6.75 million - click here to view.

This is according to Chris Liebenberg, Co-Broker Principal for Lew Geffen Sotheby’s International Realty in Roodepoort, who says that as with most residential markets throughout South Africa, the current political uncertainty has made itself felt on the West Rand.

“The local market is more cautious than a year ago, but it is still notably active as the area offers good value for money and a wide variety of homes in well-maintained and established suburbs and excellent amenities,” says Liebenberg.

In fact, he says, Roodepoort is among only a handful of areas where you can buy homes ranging from R400 000 to R20 million without moving more than a few kilometres, with a choice of properties ranging from older one bedroom apartments to modern five bedroom estate homes with all the bells and whistles.

“One of the biggest advantages of buying in the area is the number of freehold properties available for less than R1 million, which has made greater Roodepoort a favourite with young couples, families with children in school and middle-aged couples who are first-time buyers,” says Liebenberg, a Roodepoort real estate veteran who has recently moved his independent brand into the Lew Geffen Sotheby’s International Realty fold.

He says some suburbs have, however, fared better than others, with Wilgeheuwel, Honeydewand Ruimsig very popular and enjoying market stability.

This four bedroom, three bathroom home in Florida has granny flat, solar-heated pool and staff quarters. It is on the market for R2.69 million - click here to view.

“These suburbs offer a selection of great entry-level sectional title homes that, although smaller, are very comfortable with two bedrooms, one or two bathrooms and pet-friendly private gardens,” says Liebenberg, adding that such properties are also likely to show higher short- and long-term returns.

“The higher average property return is due to three factors: elevated demand, the fact that these homes require less maintenance and offer better security, which will therefore command higher rentals.”

Henno Mentz, Co-Broker Principal of Lew Geffen Sotheby’s International Realty in Roodepoort, says there have also been notable shifts in market trends in the area, most conspicuously the fact that more young professionals are buying in the mid- to top-end market.

“We have also noticed increased activity in neighbourhoods such as Constantia Kloof, Florida and Helderkruin where there was previously very little market movement,” says Mentz.

“These are predominantly local empty nesters downsizing from larger family homes, which are in turn attracting market attention from young families drawn to the excellent schools in the area.”

Citing Lightstone data, Lew Geffen, Chairman of Lew Geffen Sotheby’s International Realty says there were 76 sectional title sales at an average price of R859 000 in Constantia Kloof during the 12 months ending in March 2017. Of these sales, he says 18 took place during the last three months at an average price of R920 000, which is a healthy 7.1% increase on the average for the past year. 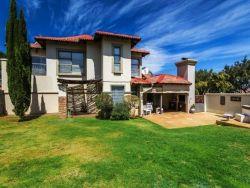 This three bathroom, two-and-a-half bathroom home in Strubensvallei has a covered patio with built-in braai and well-kept garden with jacuzzi. It is on the market for R1.6 million - click here to view.

“The freehold sector showed even better growth, with 54 house sales during the same 12-month period realising an average price of R1.94 million, which rose by 11.66% to R2.17 million on sales during the first three months of 2017,” says Geffen.

He says the Florida housing market enjoyed a similar spike in property values, with the average sale price as measured over the 12 months ending in March pegged at R1.01 million, with a healthy rise of 10.1% on average prices achieved from January to March this year to R1.12 million.

Liebenberg says while all market segments in Roodepoort are still enjoying investor interest, they have also equally taken a knock during the past year.

“High-net-worth individuals are in a position to invest offshore or put their money into local commodities that yield greater short-term returns because property investment is a long game and political uncertainty is making that a weightier risk factor for some. And for the entry-level and mid-markets, it’s simply a question of economic squeeze and affordability,” says Liebenberg.

“Rising interest rates and stricter lending criteria are making it more difficult to obtain credit, and when it is granted the credit comes at a higher cost.”

Mentz says Roodepoort is definitely an area that investment buyers should include in their research zones if they want decent rental returns because of the large number of high density developments, with suburbs like Honeydew, Wilgeheuwel and Jackal Creek Golf Estate being especially sought after.

This two bedroom, two bathroom apartment in Roodekrans has open-plan living areas leading out to the covered patio. It is in the market for R645 000 - click here to view.

Underpinning Roodepoort’s stable market, he says, is the plethora of amenities available to residents as well as its accessibility from metros like Pretoria, Midrand and Soweto.

“There are many new malls in the area, as well as several private schools and three private hospitals, a Monash University campus and several golf clubs and other sporting facilities, as well as the world-renowned Walter Sisulu Botanical Gardens,” says Mentz.

He says there are also conveniently-located office parks with commercial properties mushrooming in the area, particularly along Hendrik Potgieter Road, and people who work there want to live nearby.

“After so many years operating as an independent property agency in Roodepoort, one of the many reasons that we decided to join forces with Lew Geffen Sotheby’s International Realty was the brand’s impressive national and international marketing network,” says Liebenberg.

“Roodepoort is a wonderful place to live, whether you’re just starting out or you’re at the top of your game, and the area deserves the marketing exposure that Lew Geffen Sotheby’s International Realty will provide.”

Roodepoort is a city in the Greater Johannesburg area. It is home to Johannesburg's most famous botanical garden, Walter Sisulu National Botanical Garden. The garden is a hive of activity, especially over weekends, providing residents with the... More Info
FEATURED

Not often when one is looking for a property in a well established suburb like Florida Glen does...